Variations of our modern American Football have been in play for thousands of years dating back to Greco-Roman history. The etymology for football comes primarily out of Medieval Europe where similar games were played on foot by commoners and was differentiated from the horse mounted games of elites. American Football came into formulation out of rugby in the 19th century. The major difference between flag football and standard football is that there is no tackling. Instead players on the defensive team must remove a flag off the player with the ball to end a down and stop the offensive team’s play. 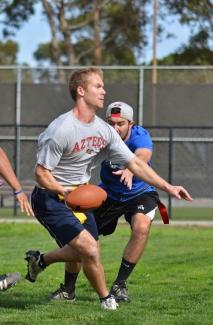