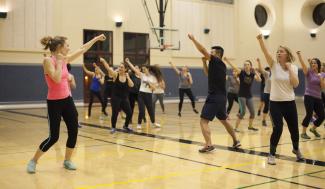 Martial Arts classes have been taught through the UCSB Department of Recreation for over 50 years. These classes are fantastic for students looking to exercise while building confidence and training the body, mind and spirit to work as one. Many of the classes focus on self-defense, coordination and building cultural awareness about regions where the traditional art began. Classes include Akido, Brazilian Jiu Jitsu, Capoeira, Filipino Kali & Ekshrima, Kickboxing and Tae Kwon Do.

All Levels
Aikido is a defensive martial art that uses rhythm, timing and evasive maneuvers to redirect an attacker's force and apply a joint lock, throw or pinning technique. This style of Aikido is known as 'Ki' Aikido. Ki Aikido stresses the development of calmness and coordination of mind and body, using breathing exercises, meditation techniques, ki tests and ki development exercises. Taught by David Almcrantz. Bring to first class: Loose clothing or gi.

Top performing fighters and individuals follow a common set of principles that sustain their success. The practice of Brazilian Jiu-Jitsu allows individuals to understand these principles through an exciting process that combines instruction, observation, practice, appropriate feedback, live training and competition. You experience results that go beyond gains in strength, flexibility, fitness or self-defense skills. By remaining truthful to the lessons learned in practice and applying them off the mat, you will  experience an overall improvement on your focus, energy and general well-being.

Beginner
The Fundamentals Program teaches these basic principles of effective fighting to individuals like you. Its structure condenses an immense diversity of Brazilian Jiu-Jitsu into core fundamental moves combined intelligently and safely to optimize your learning. Participants may or may not wear a gi. FOR SAFETY ISSUES, no gi does not mean regular clothes. Please wear a rash guard, spats and fighting shorts. All shorts worn during class must cover gluteal folds.

Advanced
This class is designed for students interested in advanced techniques for competition and self-defense. You will  learn and practice advanced sweeps, submissions, escapes and counters. You will also learn how to reverse an attacker and how to force your opponent into submission. Detailed instruction in technique, specific drilling, and position advancement are the main focus of this class.

Capoeira is an Afro-Brazilian martial art that involves music, ritual and movement. It was created by African slaves in Brazil around 400 years ago. Music was an integral part of the discipline because it taught rhythm and hid its forcefulness from onlookers. To outsiders it appeared to be playful/acrobatic dancing and joking around. Eventually the enslavers realized its power and outlawed it. Today Capoeira is Brazil's second national sport and is gaining popularity throughout the world. It can be done by anyone of any age or size. Played in a ritual roda (circle), the prehistoric berimbau stringed bow instrument sets the pace and swing of the capoeira jogo (game). You will learn to express your own unique style while getting a mental and physical workout. Taught by Mariano Silva.

Kendo is one of the most popular martial arts in Japan and its origin can be traced to the creation of the Japanese sword (Nihon-to). The course follows Kendo instructions and rules of All U.S. Kendo Federation and All Japan Kendo Federation. This beginners' course covers basic Reigi (etiquette, respectfulness, appreciation), footwork, posture, and forms of striking. This course does not require bogu (protectors). Dogi and hakama (Kendo clothing) are not required but welcomed if you have. Bamboo swords are provided but the cost is not included in the class fee.

Muay Thai, which means Thai Boxing, originated in Thailand hundreds of years ago. The class will focus on techniques for self-defense, competition and aerobic exercise. A range of Muay Thai kicks, boxes, knees, elbows, sweeps and drills will be covered. A focus on power, speed, timing, footwork and rope skipping will be the main components of instruction. Students will be grouped according to ability. Taught by John Patelzick.

We practice the traditional Chung Do Kwan style of Tae Kwon Do, as brought to the USA by Grandmaster Duk Sung Son. Emphasis is on speed, power, accuracy, balance, and control in a no contact format. Every class we practice basic techniques, forms, and partner exercises leading to freestyle no-contact sparring. The class offers physical and mental conditioning, practical self-defense ability, personal growth and confidence, and the challenge and freedom of creative self-expression afforded by any other art. It is equally suitable for both men and women, beginners and experts. New students should wear comfortable, loose-fitting clothing, such as a t-shirt and sweat pants, and bring their enthusiasm to class. What you get out of it depends on what you put into it. Ron Gans received his black belt in Tae Kwon Do from Grandmaster Duk Sung Son, head of the World Tae Kwon Do Association, in 1993. He is currently a 5th degree black belt. This class has been taught at UCSB for over 30 years.

Filipino art of Kali/Eskrima, is a weapons based Martial Art using ratan sticks, blades, ground work and empty hands. In this class we will train weapons technique while working on cardio and conditioning, as well as skills and attributes such as accuracy, timing, footwork, and coordination. This class is ideal for participants who want a simple, effective, and fun system of self-defense. Rattan sticks and practice blades will be provided by the instructor. All are welcome!

Ron Gans is a 5th degree black belt in Tae Kwon Do, having practiced and taught the Chung Do Kwan (Blue Wave) style for over three decades. He has been at University-based classes in Philadelphia (U. Penn.), Boston (MIT), and since 1997, here at UCSB. He has learned directly from the late Grandmaster Duk Sung Son, head of the World Tae Kwon Do Association, as well as from many Masters and Grandmasters throughout the United States. Ron has high TKD standards, taking the time to ensure every student learns the proper way to do each technique, while making sure everyone gets a solid physical workout and has fun in the process. The benefits of martial arts practice extend well beyond the physical, providing for self confidence growth, overall heath improvements, and new friendships.

Maurice Moreno was born in St. Thomas, US Virgin Islands and moved to Rio de Janeiro, Brazil when he was 6 months old. Moreno began training Judo, but then switched to Jiu Jitsu at 12 years old after discovering the art. His parents didn’t allow him to do it at first, so he had to postpone his training. A few years later, Master Rillion Gracie started teaching private classes at the club Moreno attended. Finally, Jiu Jitsu became a part of his life. Though Master Rillion soon moved away from Rio, Moreno joined another club thought by Rillion's older brother, Gran Master Carlson Gracie's Gym. Moreno earned his blue belt here, as well as a few models competing. After 6 years at the gym, Master Carlson moved to California and joined a gym opened by his two black belt heroes, Master Murilo Bustamante and Master Sergio Bolão. Here, Moreno earned his purple belt. In 1995, he quit Jiu Jitsu to finish his Masters Degree. It was supposed to be a short break, but it wasn’t. Fourteen years later, already living in Santa Barbara, California, Moreno went back to the mats at Gracie Barra Santa Barbara. At GB he became a brown belt where he got a couple of medals in tournaments along the years. In 2015 he started a Brazilian Jiu Jitsu program at UCSB. After 3 years, the program jumped from 3 students to 141. In 2018, Moreno won the Brazilian Jiu Jitsu world tournament. He became the 2018 World Champion in the open weight division and 3rd place in the Ultra Heavy division. In December 2018, Moreno was promoted to Black Belt.